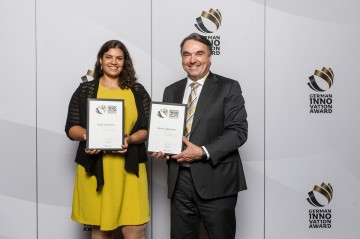 Klüber Lubrication has won the German Innovation Award presented annually by the German Design Council. The global market leader for speciality lubricants was recognised in two categories: in “Material Surface” for the innovative technology of its hydro lubricants and in the “Design Thinking” category for the equally cutting-edge process used to develop them.

Design Thinking
In addition to the product itself, the jury also found the innovative and agile development process worthy of an award in the “Design Thinking” category. The new product was created in close and flexible cooperation between various departments at Klüber Lubrication and with dynamic customers. An iterative approach and cross-functional staffing enabled the project team to assume new viewpoints in order to identify customer needs early on and translate them into concrete concepts.

For Klüber Lubrication the hydro lubricants project paved the way to innovative project methods. In future, agile methods such as design thinking will be used wherever possible in order to foster innovation.